This article is part of the Research Topic

The CRISPR/Cas systems in prokaryotes such as bacteria and archaea are the adaptive immune system to prevent infection from viruses, phages, or other foreign substances. When viruses or phages first invade the bacteria, Cas proteins recognize and cut the DNA from viruses or phages into short fragments that will be integrated into the CRISPR array. Once bacteria are invaded again, the modified CRISPR and Cas proteins react quickly to cut DNA at the specified target location, protecting the host. Due to its high efficiency, versatility, and simplicity, the CRISPR/Cas system has become one of the most popular gene editing technologies. In this review, we briefly introduce the CRISPR/Cas systems, focus on several delivery methods including physical delivery, viral vector delivery, and non-viral vector delivery, and the applications of disease therapy. Finally, some problems in CRISPR/Cas9 technology have been proposed, such as the off-target effects, the efficiency of DNA repair mechanisms, and delivery of CRISPR/Cas system safely and efficiently to the target location.

The disease is the common enemy of human mankind. Many biological scientists and clinicians have developed and innovated a variety of emerging therapeutic tools and strategies for different diseases such as gene therapy. This therapy modifying genes to treat or prevent diseases mainly target genetic diseases, some cancers, and viral infections. Despite being an emerging therapy, gene therapy exerts an important function in clinical application such as new drug development. Many gene therapy drugs, such as Zolgensma, Strimvelis, Luxturna, LentiGlobin, etc, are produced after the modification of gene editing tools (zinc finger nucleases (ZFNs), transcription activator-like effector nuclease (TALENs), and clustered regularly interspaced short palindromic repeats (CRISPR)/CRISPR-associated (Cas) system). For gene therapy, these tools show huge potential and function.

Before the CRISPR/Cas system (also known as third-generation genome editing tool), ZFNs and TALENs are the commonly used gene-editing tools. There are some limitations in these two technologies, such as low editability, high off-target rate, high cytotoxicity, high cost, time consumption, and labor consumption. Compared with TALENs and ZFNs, the CRISPR/Cas system is simpler to design, lower cost, higher targeting efficiency, lower cost, lower off-target rate, and lower cytotoxicity. Besides, this technology can edit many different genes in vitro or in vivo(Bharathkumar et al., 2022). Based on these advantages, the CRISPR/Cas system currently has become a potent genome editing tool in the field of molecular biology. On the other hand, under the optimization trend of CRISPR/Cas 9 system cleavage elements in the future, CRISPR/Cas9-based CRISPR technology may dominate the future of gene editing despite the use more of TALENs technology in clinical practice now.

The CRISPR/Cas system existing in prokaryotes such as bacteria and archaea is the adaptive immune system to prevent infection from viruses, phages, or other foreign substances. CRISPR, a repeating sequence discovered firstly by Ishino in the genome of E. coli, contains a large number of adjacent leader sequences and repeat sequences (Ishino et al., 1987). As an important component in this system, recognition is the main function of Cas proteins. Additionally, different types of Cas proteins show their specific functions in the acquisition, expression, or interference stage. When viruses or phages first invade the bacteria, Cas proteins recognize and cut the DNA from viruses or phages into short fragments that will be integrated into the CRISPR array (Makarova et al., 2011). CRISPR RNA (crRNA) and transactivated CRISPR RNA (tracrRNA) are produced by CRISPR once bacteria are invaded by the same foreign substance again. The complex containing crRNA, tracrRNA, and Cas protein is formed. Then, crRNA identifies and matches with the foreign DNA by base pairing, which guides Cas protein to cut target DNA sequences of the virus or phages to protect their hosts (Makarova et al., 2011) (Figure 1). 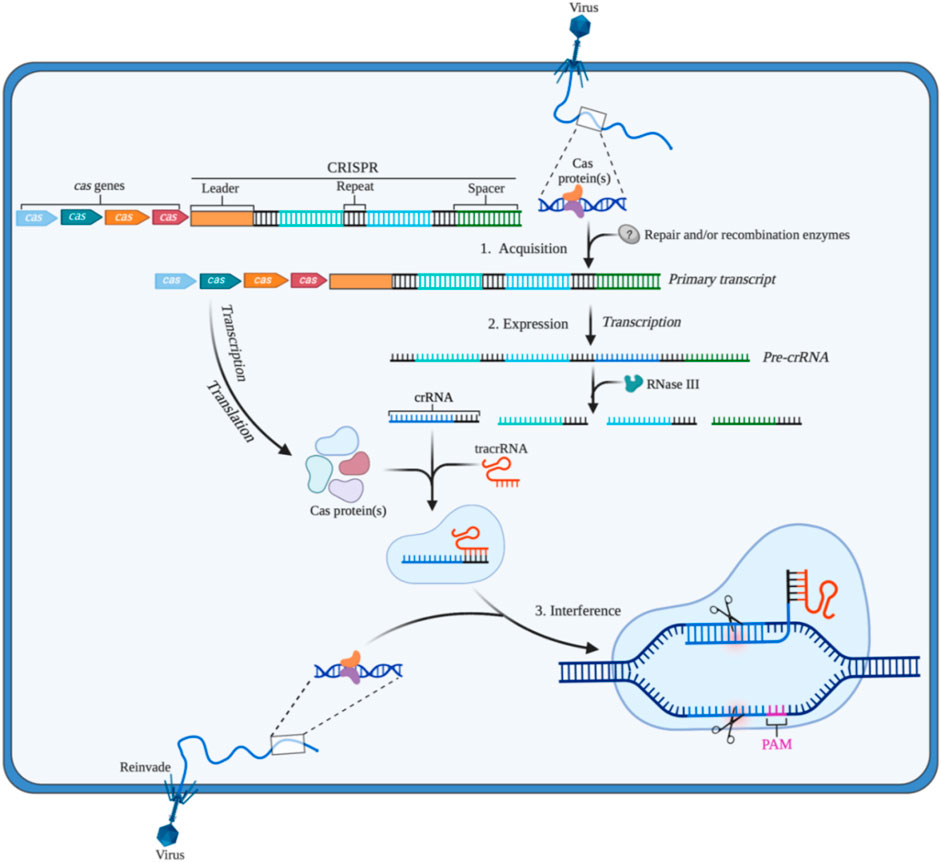 FIGURE 1. The CRISPR/Cas adaptive immune system in prokaryotes (1) Acquisition: in this stage, the invading DNA is fragmented, and then a new protospacer is selected and integrated as a new spacer in the CRISPR array; (2) Expression: during this second stage, the pre-crRNA produced by the CRISPR array is cleavaged into mature crRNAs by RNase III. The mature crRNAs, tracrRNAs, and Cas proteins assemble to form ribonucleoprotein (RNP) complexes; (3) Interference: at the final stage, the crRNP identifies invading DNA by small guide RNA (sgRNA) (crRNA:tracrRNA), and Cas protein cut the foreign DNA, thereby removing the foreign genetic materials. Created with BioRender.com.

Since it has been shown to cut DNA in vitro in 2012 (Gasiunas et al., 2012; Jinek et al., 2012), CRISPR/Cas9 gene editing technology has been rapidly improved and applied in many fields such as biology, biomedicine, agriculture, environment. Note of Zhang’s team found widespread CRISPR/Cas9 system in prokaryotes can be used in eukaryotes (Cong et al., 2013). Studies about the CRISPR/Cas system in the past decade have shown the significant potential of this tool in treating diseases related to genetic mutation or change, such as Alzheimer’s disease, huntington’s disease, non-small-cell lung carcinoma (NSCLC), and cardiovascular diseases. The safety and feasibility of CRISPR/Cas 9 gene editing technology by knocking out PD-1 in T cells are proved in a clinical study treating NSCLC by Lu in 2020, but the therapeutic efficacy should be improved in the next clinic experiments (Lu et al., 2020). 38 clinical studies using CRISPR technology to treat diseases can be found at ClinicalTrials.gov. Until 23 September 2022. The huge strengths and potential in gene therapy make the CRISPR/Cas system more important in the biology and biomedicine field. 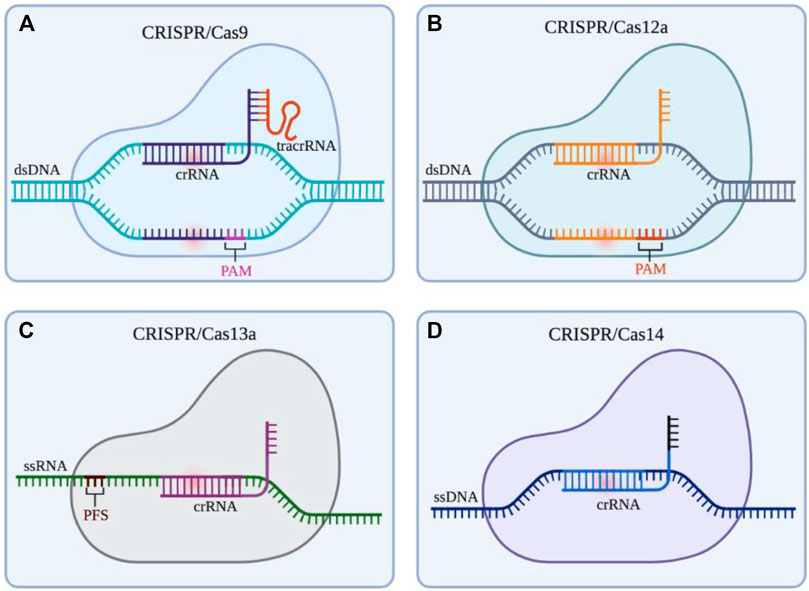 FIGURE 2. Gene editing schematic of four commonly used CRISPR/Cas systems (Cas9, Cas12a, Cas13a, and Cas14). (A) CRISPR/Cas9 system is able to cleave at 3bp upstream of the double stranded DNA (dsDNA) PAM by the guidance of small guide RNA (sgRNA) (crRNA: tracrRNA), resulting in the double strand break (DSB) of the target site and the blunt ends. (B)CRISPR/Cas12a system only depends on crRNA to recognize the PAM of dsDNA, then cleaves the target DNA in turn to produce sticky ends (C) CRISPR/Cas13 system utilizes crRNA to target and cleave single stranded RNA (ssRNA) downstream of the PFS. (D) The action mode of CRISPR/Cas14 system is similar to CRISPR/Cas12a system, but it does not rely on PAM to identity and cut single stranded DNA (ssDNA). Created with BioRender.com.

The CRISPR/Cas9 system, the most powerful and potent gene editor tool currently, is commonly and widely applied for gene modification in various cells and animals (Figure 2A). Cas9 protein containing HNH and RuvC endonuclease active sites can cleave double-strand DNA with the guidance of crRNA (Jinek et al., 2012). In this process of the CRISPR/Cas 9 System, the transactivating crRNA (tracrRNA) involves the formation the ribonucleoprotein (RNP) complex (crRNA: tracrRNA: Cas9). It is worth noting that Streptococcus pyogenes Cas9 (SpCas9) is the first and common Cas effector for genome engineering by identifying protospacer adjacent motif (PAM) sequences (5′-NGG-3′) (Chylinski et al., 2013; Anders et al., 2014). Homology-directed repair (HDR) and non-homologous end joining (NHEJ) will happen to repair the double strands break (DSB) after cutting DNA by Cas9. In addition, other variants of Cas9 such as Staphylococcus aureus Cas9 (SaCas9) broaden the range of target locus, this is because it can identify the PAM sequence including 5′-NNGRRT (NNGAAT, NNGAGT, NNGGAT, NNGGGT) (Ran et al., 2015). Besides, to solve some limitations in the system such as limited genome-targeting scope restricted by PAM sequences, off-target effect, and low efficiency and specificity, many researchers have developed various advanced systems (i.e., dead-Cas9 system, base editing system, Cas9 variant system, prime editing system) (Xu and Li, 2020). Up to now, the CRISPR/Cas9 system still is the workhorse of gene editing, and its development changes and revolutionizes the range from biological engineering to biomedical applications. However, CRISPR/Cas9-mediated clinical treatment still faces many challenges and difficulties like highly efficient delivery and off-target effects.

Since Cas12a (known as Cpf1) was founded by Zhang’s team in 2015 (Zetsche et al., 2015), the CRISPR/Cas12 system has also been encouraged to develop genome editing technology (Figure 2B). Differing from Cas9, Cas12a recognizes 5′-TTTV-3′ PAM and generates sticky ends, which improves the increased efficiency and precision of HDR-mediated insertion (Swarts et al., 2017). More importantly, Cas12a only needs the guidance of crRNA to recognize dsDNA without the assistance of tracrRNA. Apart from that, in 2018, Chen surprisingly found Cas12a can cleave single-stranded DNA (ssDNA) with indiscrimination to reduce activity, which means viral DNA in patients’ samples can be detected by the CRISPR/Cas12a system, further providing a diagnostic tool for the clinic (Chen et al., 2018). What’s more, Cas12a can recognize and cut target genes several times after cutting, which is because the incision formed by Cas12a is far from the PAM site, and the nucleotide insertion or deletion caused by NHEJ will not lead to PAM sequence changes (Swarts et al., 2017). In clinic, CRISPR/Cas12a system also is used for detecting pathogens in pevere pneumonia and sepsis (NCT04178382, NCT05143593). In the future, the application of the CRISPR/Cas12a system might be much wider in clinical therapy. Another Cas protein, Cas12b (also known as Cpf1 C2C1) is an RNA-directed nuclease, but it has not yet been fully developed and this may be due to its high-temperature addiction. In 2018, Zhang and his colleagues redesigned Cas12b to enhance its activity at human body temperature (37°C), and the remodified Cas12b has a higher specificity for target sequences in cell culture experiments (Strecker et al., 2018). There are still many difficulties promoting the CRISPR/Cas12b system to be a mature gene editing tool.