A research team supported by the National Institutes of Health has developed a new approach to better understand the biology of polycystic kidney disease (PKD), an often-life-threatening genetic disorder that affects millions worldwide. Scientists combined two ways to model the disorder — organ-in-a-dish and organ-on-a-chip technologies — to show the role of glucose, a sugar commonly found in blood, in forming PKD cysts. The results, reported in Nature Communications, could lead to better ways to test and develop treatments for PKD, and perhaps other diseases. 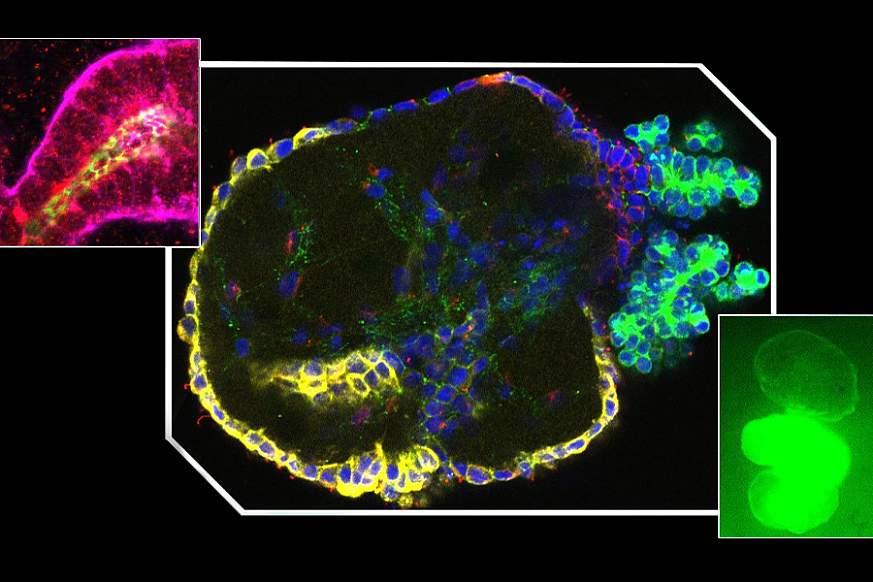 An organ-in-a-dish, or organoid, is a miniature version of an organ grown in a laboratory dish. It can mimic key features of a human organ’s structure and function. Organs-on-a-chip, or tissue chips, are more complex 3-D models, containing channels and living cells, that aim to mimic organ and tissue structure and environment. NIH’s National Center for Advancing Translational Sciences (NCATS) research programs develop both technologies as human cell–based approaches to study disease and better predict whether drugs will be safe or toxic in humans.

In PKD, tiny tubes (tubules) in the kidneys expand like water balloons, forming sacs of fluid over decades. The sacs, or cysts, eventually crowd out healthy tissue, leading to problems in kidney function and kidney failure. Scientists have identified many of the genes that cause PKD, but much about the disease remains unknown, including how the cysts form.

“We’re able to boil down a complex process of cyst formation in tubules into a process in a petri dish that takes just a few weeks, but there’s been a lack of technologies to study the disease further,” said University of Washington School of Medicine scientist Benjamin Freedman, Ph.D., who led the work. “Animal models are helpful, but translating the results of those studies to peopl has been a challenge.”

Freedman, co-author Jonathan Himmelfarb, M.D., and their Seattle-based colleagues decided to explore combining organoid technology with a tissue-chip platform. Scientists believe that fluid flow is important in the development of cysts, but they had no way of testing the theory in organoids.

“In kidneys, fluid is always going through the tubules; at any given moment the kidneys have about 25% of the body fluid going through them,” Freedman explained. “We can’t reproduce this system in the dish because fluid needs to move through the kidney structures. Using microfluidic technology in tissue chips was a natural next step.”

Freedman’s group showed that exposing the PKD organoid-on-a-chip model to a combination of water, sugar, amino acids and other nutrients caused cysts to expand relatively quickly. They found that the cysts were absorbing glucose and pulling in water from the fluid passing over them, making the cysts grow larger. Although glucose is generally absorbed by the kidneys, glucose absorption has not been connected to cyst formation in PKD.

“It wasn’t a huge surprise that the cysts could absorb glucose, but it was surprising that they were dependent on it. It’s a new way of thinking of how these cysts form,” Freedman said.

The scientists added fluorescent glucose to mice with PKD and found that the mouse cysts also took up the glucose. “We think the tubules are taking in fluid in the mice, just like in the organoids. The kidney gets bigger, and as the tubules widen to accommodate the expansion over time, cysts form,” Freedman said.

Understanding the mechanisms of PKD can point to new ways to treat it. As part of the study, the research team showed that adding compounds that block glucose transport prevented cyst growth. Freedman noted glucose inhibitors are being developed for other types of kidney disease.

“The researchers have shown that simulating fluid flow is essential to making this system more like the environment in the kidney with PKD,” said Danilo Tagle, Ph.D., director of the NCATS Office of Special Initiatives. “Combining the two technologies makes tissue chip technology more adaptable to drug discovery and drug development and allows researchers to take advantage of the strengths of both platforms. This is very promising for studying other diseases in new ways in the future.”

About the National Center for Advancing Translational Sciences (NCATS): NCATS conducts and supports research on the science and operation of translation — the process by which interventions to improve health are developed and implemented — to allow more treatments to get to more patients more quickly. For more information about how NCATS helps shorten the journey from scientific observation to clinical intervention, visit https://ncats.nih.gov.