A clinical trial led by the National Cancer Institute (NCI), part of the National Institutes of Health, has resulted in the first approval of a treatment for advanced alveolar soft part sarcoma (ASPS). The immunotherapy drug atezolizumab (Tecentriq) was recently approved by the U.S. Food and Drug Administration (FDA)(link is external) for the treatment of adults and children 2 years and older with ASPS that has spread to other parts of the body or cannot be removed by surgery. 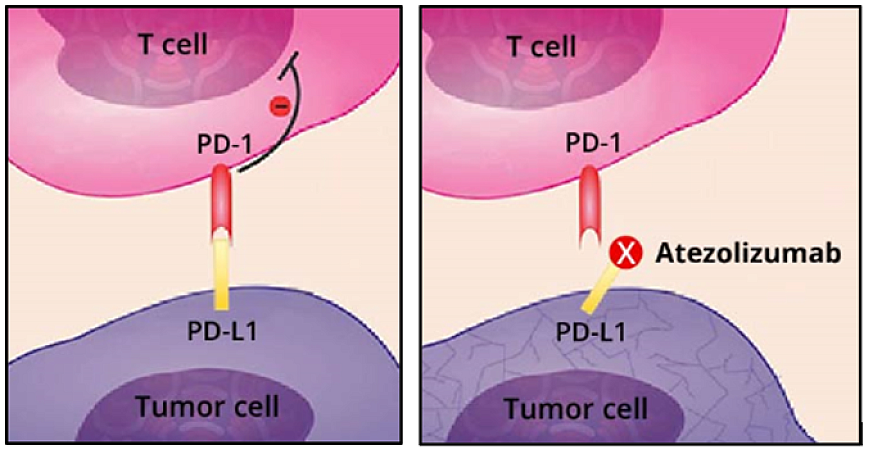 ASPS is an extremely rare cancer that affects mostly adolescents and young adults. The approval was based on data from a non-randomized phase 2 trial (NCT03141684) funded by NCI and led by Dr. Alice Chen, M.D., of the Developmental Therapeutics Clinic in NCI’s Division of Cancer Treatment and Diagnosis (DCTD). Genentech, a member of the Roche Group and the manufacturer of atezolizumab, provided the drug to NCI through a cooperative research and development agreement. The results of the study are being prepared for publication.

“Forty percent of the patients were treated at the NIH Clinical Center in Bethesda," said James H. Doroshow, M.D., director of DCTD. “Our ability to bring patients in from all over the world was a key factor in the ability to do the study.”

“This approval will make a huge impact in terms of a rare disease that has been particularly challenging to treat,” Dr. Chen noted.

This is the largest study on ASPS. It is also the first study conducted in the NCI-funded Experimental Therapeutics Clinical Trials Networkthat has resulted in a drug approval. The network enabled sarcoma specialists at academic medical centers from across North America to enroll patients in the trial.

“This is a major milestone for investigators in the Experimental Therapeutics Clinical Trials Network, as well as for the ASPS patient community, and for research on rare cancers,” said Elad Sharon, M.D., of DCTD, who is one of the study leaders.

This is also the first time atezolizumab has been approved for children. Dr. Chen noted that this was enabled by the participation of the Pediatric Oncology Branch in NCI’s Center for Cancer Research, which helped enroll children in the trial.

“This study is an important example of collaboration between pediatric and medical oncology, allowing children with very rare cancers access to effective new therapies,” said John W. Glod, M.D., Ph.D., of the Pediatric Oncology Branch. “The entire study team is grateful to the patients who participated in the study and made this work possible.”

About 80 people in the United States are diagnosed with ASPS every year. The disease typically begins in the soft tissue that connects and surrounds the organs and other tissues. Although the disease grows slowly, once it spreads it is often deadly, and chemotherapy is ineffective. About 50% of patients with metastatic disease are still alive after five years. New targeted treatments, including drugs called tyrosine kinase inhibitors, do not have lasting effectiveness. Recently, however, immunotherapy drugs have shown promise as possible therapies for ASPS.

Atezolizumab is an anti-PD-L1 immune checkpoint inhibitor that works by helping the immune system respond more strongly to cancer. FDA has approved atezolizumab for the treatment of patients with several cancer types, including liver cancer, melanoma, and lung cancer.

In 2020, FDA granted breakthrough therapy designation for atezolizumab to treat patients with unresectable or metastatic ASPS. This designation means that atezolizumab, which is intended to treat a serious condition, had met FDA’s criteria for expedited development and review of the drug. Later that year, FDA granted orphan drug designation to atezolizumab for soft tissue sarcoma in general. This status provides incentives for companies to develop a drug for rare diseases.

The phase 2 trial enrolled 49 ethnically diverse patients ages 2 and older with metastatic ASPS, who were given an infusion of atezolizumab every 21 days. About a third of the patients responded to the treatment with some degree of tumor shrinkage, according to their doctor’s assessment. Most of the other patients experienced stable disease.

Serious side effects occurred in 41% of patients receiving atezolizumab; these included anemia, diarrhea, rash, dizziness, hyperglycemia, and pain in the extremities. However, no patients came off the study because of side effects.

“This approval represents a victory for rare diseases, which are understudied in clinical trials,” said Dr. Chen. “For this approval to go through in a rare disease, and to be able to make an impact on these young people’s lives, is very significant.”

Research teams are now conducting additional trials with atezolizumab for patients with ASPS, including giving the drug in combination with other therapies.

About the National Cancer Institute (NCI): NCI leads the National Cancer Program and NIH’s efforts to dramatically reduce the prevalence of cancer and improve the lives of cancer patients and their families, through research into prevention and cancer biology, the development of new interventions, and the training and mentoring of new researchers. For more information about cancer, please visit https://www.cancer.gov or call NCI’s contact center, the Cancer Information Service, at 1-800-4-CANCER (1-800-422-6237).