Research explores how new information is consolidated across the sleep-wake cycle. 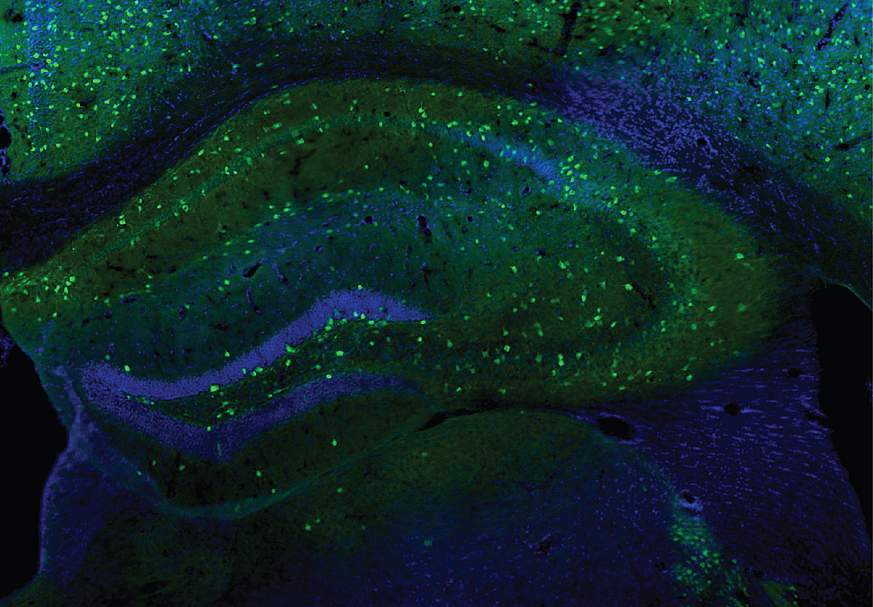 Interneurons (green) in the hippocampus of a mouse. These cells play a subtle but powerful role in balancing neural activity during the sleep-wake cycle.Lu lab, NIH/NINDS

Using a mouse model, researchers have discovered a new daily rhythm in a type of synapse that dampens brain activity. Known as inhibitory synapses, these neural connections are rebalanced so that we can consolidate new information into long-lasting memories during sleep. The findings, published in PLOS Biology(link is external), may help explain how subtle synaptic changes enhance memory in humans. The study was led by researchers at the National Institute of Neurological Disorders and Stroke (NINDS), part of the National Institutes of Health.

“Inhibition is important for every aspect of brain function. But for over two decades, most sleep studies have focused on understanding excitatory synapses,” said Dr. Wei Lu, senior investigator at NINDS. “This is the first study to try to understand how sleep and wakefulness regulate inhibitory synapses.”

In the study, Kunwei Wu, Ph.D., a postdoctoral fellow in Dr. Lu’s lab, examined what happens at inhibitory synapses during sleep and wakefulness in mice. Electrical recordings from neurons in the hippocampus—a brain region important for memory formation—showed a previously unappreciated pattern of activity. During wakefulness, steady “tonic” inhibitory activity increased, while fast “phasic” inhibition decreased. They also found much larger activity-dependent enhancement of inhibitory electrical responses in neurons from awake mice suggesting that wakefulness, but not sleep, could strengthen these synapses to a greater degree.

Inhibitory neurons use the neurotransmitter gamma-aminobutyric acid (GABA) to decrease activity in the nervous system. At inhibitory synapses, these neurons release GABA molecules into the synaptic cleft, the space between neurons where neurotransmitters diffuse. The molecules bind to GABA type A (GABAA) receptors on the surface of neighboring excitatory neurons, making them less likely to fire.

Further experiments showed that the synaptic changes during wakefulness were driven by an increased number of α5-GABAA receptors. When the receptors were blocked in awake mice, the activity-dependent enhancement of phasic electrical responses diminished. This suggests that the accumulation of GABAA receptors during wakefulness may be key to building stronger, more efficient inhibitory synapses, a fundamental process known as synaptic plasticity.

“When you are learning new information during the day, neurons are bombarded with excitatory signals from the cortex and many other areas of the brain. To transition this information into a memory, you first need to regulate and refine it—that’s where inhibition comes in,” said Dr. Lu.

Prior studies have shown that synaptic changes in the hippocampus may be driven by signals that arise from inhibitory interneurons, a special type of cell that comprises only about 10-20% of neurons in the brain. There are over 20 different subtypes of interneurons in the hippocampus, but recent studies have highlighted two types, known as parvalbumin and somatostatin, that are critically involved in synapse regulation.

To identify which interneuron was responsible for the plasticity they observed, Dr. Lu’s team used optogenetics, a technique that uses light to turn cells on or off, and found that wakefulness led to more α5-GABAA receptors and stronger connections from parvalbumin, but not somatostatin, interneurons.

Humans and mice share similar neural circuits underlying memory storage and other essential cognitive processes. This mechanism may be a way for inhibitory inputs to precisely control the ebb and flow of information between neurons and throughout entire brain networks.

“Inhibition is actually quite powerful because it allows the brain to perform in a fine-tuned manner, which essentially underlies all cognition,” said Dr. Lu.

Because inhibition is essential for nearly every aspect of brain function, this study could contribute to helping scientists understand not just sleep-wake cycles, but neurological disorders rooted in abnormal brain rhythms, such as epilepsy.

In the future, Dr. Lu’s group plans to explore the molecular basis of GABAA receptor trafficking to inhibitory synapses.

This study was supported in part by the Intramural Research Program at the NINDS.

This press release describes a basic research finding. Basic research increases our understanding of human behavior and biology, which is foundational to advancing new and better ways to prevent, diagnose, and treat disease. Science is an unpredictable and incremental process—each research advance builds on past discoveries, often in unexpected ways. Most clinical advances would not be possible without the knowledge of fundamental basic research. To learn more about basic research, visit NIH's Digital Media Kit.