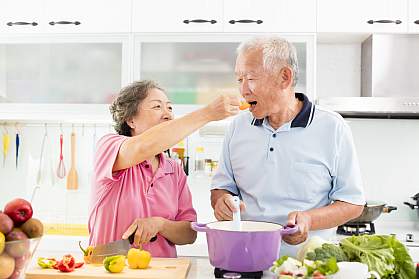 Around 6 million Americans are currently living with Alzheimer’s disease or another type of dementia. That number is expected to rise substantially over the next several decades as the population ages. These conditions, which affect the ability to remember, think, and make decisions, are devastating to patients as well as their families and communities.

Studies have found several lifestyle factors that may help reduce the risk of dementia. These include a nutritious diet, exercise, social engagement, adequate sleep, and activities that challenge the brain. But more targeted preventive strategies are needed to help people stay cognitively healthy as they age.

Antioxidants are compounds, commonly found in vegetables and fruits, that help protect cells from a certain type of molecular damage. Some studies have suggested that high levels of antioxidants in the diet may help prevent the development of dementia. But other studies have not found an effect. All these studies asked people to remember what types of foods they’d eaten over a long period of time. Such surveys are prone to error.

A research team led by Dr. May Beydoun from NIH took a different approach to explore the effects of antioxidants. They analyzed blood samples from more than 7,000 people between the ages of 45 and 90 who had enrolled in NHANES, an ongoing national study of nutrition, between 1988 and 1994. This data was linked with databases that tracked participants over an average of 16 years to find who later developed Alzheimer’s disease or other dementias.

The researchers looked at the associations between levels of certain antioxidants found in blood and the risk of developing dementia later in life. The compounds analyzed included carotenoids—antioxidant pigments found in plants—and some vitamins. Results were published on May 24, 2022, in Neurology.

Overall, the team found that people with higher blood levels of carotenoids were less likely to develop dementia. However, when the researchers expanded their analyses to include lifestyle factors such as smoking and diet, and socioeconomic factors like education and income, the benefit of higher blood carotenoid levels disappeared.

This picture changed when the team looked at individual carotenoids. Blood levels of some of these remained associated with a reduced risk of developing dementia after adjustments for other health, lifestyle, and social factors. However, the size of the effect was reduced by these adjustments. The potentially protective carotenoids were lutein and zeaxanthin, which are found in green, leafy vegetables, and β-cryptoxanthin, which is found in some orange-colored fruits.

In contrast, blood levels of the antioxidant vitamins A, C, and E weren’t individually associated with dementia risk. Additional analyses suggested that high levels of vitamin A and E might actually counteract the effects of other antioxidants. The findings suggest that the protective effects of some antioxidants may depend on the presence of other molecules in the body.